Walking in the UK
WALKING GUIDE

Walking in the UK: An introduction

This page is aimed at overseas visitors who are getting to know the outdoor way of life in the UK.

A brief note about names: walking is the British term for hiking, tramping or any other words for putting one foot in front of the other in the outdoors. Rambling is the term for gentler walks through flatter countryside. Hillwalking or mountain walking mean walking, as opposed to rock climbing, up hills and mountains. Trekking and backpacking are used fairly interchangeably, but backpacking suggests carrying your camping gear on your back.

Brits don't have an equivalent to the term through-hiking, re. long-distance paths - they'd just say they were doing the whole thing.

Alpine Exploratory in the UK

For the highest and rockiest mountains
Head to the Highlands! The Scottish Highlands contain by far the biggest expanse of mountainous terrain in the UK. Ben Nevis at 1,344m (4,409ft) is the highest mountain in the British Isles; with its huge North face cliffs and the sharp ridge to neighbouring Carn Mor Dearg, it certainly lives up to this status. On the Isle of Skye the Cuillin ridge is justly famous as the most jagged range in the country. Back on the mainland check out the Glen Coe peaks, the area around Glen Shiel, the Arrochar Alps and the Galloway Hills.

Outside Scotland, the highest mountains of England and Wales are also very worthwhile rocky peaks. Scafell Pike at 978m (3,209ft) offers several long approaches from nearby valleys, which Snowdon at 1,085m (3,560ft) is a mountain of many radiating ridges enclosing deep combes.

For coastal views of cliffs and sea
Being an island, the British mainland is not short of coastal views. It so happens that many parts of our coast are exciting walking territory in their own right. Cornwall is perhaps the best known coastal walking destination with miles of footpath skirting the edge of cliffs. Look out for quiet sandy beaches below. The Pembrokeshire coast at the South West tip of Wales is less well known but arguably just as spectacular. For sea views mixed with wild rocky landscapes, the Western Highlands and the areas of Assynt and Sutherland in the far North of Scotland are incomparable. Getting across to the islands (Skye, Rum, Harris...) adds another perspective to this amazing experience.

For idyllic lower-level walks
It's difficult to look beyond the Southern Lake District for the best rambling country. The scenery is captivatingly beautiful and yet tranquil at the same time. The density and quality of the footpaths make this area very easy to walk through. Link up valleys such as Great Langdale, Little Langdale or Yewdale; walk from idyllic villages such as Elterwater, Hawkshead or Satterthwaite; or explore beyond the lakes and tarns such as Tarn Hows, Blea Tarn and Coniston Water. This country is also easily reached by bus from Ambleside.

For low-level walks the Yorkshire Dales and the Peak District also have many excellent spots. Easier walks can of course be made in even the harshest and highest mountainous areas, and on this note the Highlands, Snowdonia and higher Lakeland hills are great places to go.

Our holidays come with notes on relevant cities, in your info pack:

The head of Haweswater

Such low hills - where's the challenge?

Overseas visitors could be forgiven for thinking the UK's mountains are just low easy hills - at a maximum of 1,344m (4,409ft) and often between 600m and 1,000m, the hills certainly are very low compared to the Alps, Pyrenees, Tatras and of course the Rockies and Himalayas. The highest point in the British Isles would even fit underneath many of the valleys surrounding Mont Blanc! Despite this the wilder mountain ranges in the UK can present a real challenge to the uninitiated, due to three main reasons:

Lack of paths
Climbing a given mountain in the UK, walkers can't expect to follow a footpath all the way. Popular mountains usually have footpaths up and down, but on the rest you should expect to go cross-country at least part of the way. This is a very different situation from the Alps where walkers pick their paths from the network of footpaths available. Mountains in the UK are largely clear of trees on their upper slopes, leaving bare grassy and rocky hillsides that let walkers (with care) find their own way, subject to any restrictions on access.

Wild weather
British weather is less settled than in the Alps. A typical summer week could be full of sunshine but more likely will be a frequently changing mix of sun, rain and wind.

Lack of signs
The outdoor culture in the UK is one of self-reliance in wild areas. Signposts have never become prevalent in the hills and mountains, even on popular peaks such as Snowdon or Helvellyn. There are also no waymarks to be found, which might surprise people used to walking in the Alps where painted lines and dots often mark the way. Instead the way forward is to take a map compass and (crucially) the skills to use them in mist. In the valleys the situation is different. Here, it is usual to find signposts showing the route of paths across fields and down tracks.

The above applies to the high mountains. In the valleys, for example the lower-lying area of the Southern Lake District around Grizedale and Ambleside, footpaths and signposts are common and the weather should not affect your walk too much.

Introduction
The UK has a good range of long-distance paths, or trails. The best known are possibly the Pennine Way (429km or 268 miles) running the length of the Pennine chain from Derbyshire to the Scottish border, the West Highland Way (152km or 95 miles) running from Glasgow to Fort William through the Southern Highlands, and the Coast to Coast (307km or 192 miles) initiated by the famous fellwalker Wainwright and running from St Bees to Robin Hood's Bay across three of England's national parks: the Lake District, the Yorkshire Dales and the North York Moors.

In Scotland we also cover the Hebridean Way, a 250km (156 miles) trail running up the chain of the Outer Hebrides, and the Affric Kintail Way which is a 71km (44 miles) valley trail through the picturesque Glen Affric. In England we offer the Lake District Tour, a 99.5km (62.5 miles) circular route, and in Wales our newest trip is the Snowdonia Way which is 156km (97 miles).

For other ideas, try the following:

Trails versus centre-based holidays
Following a trail is one of the most enjoyable ways to walk in Britain. As each day progresses you are ticking off sections of a set route, which can be very satisfying. There is the anticipation of trail highlights yet to come. As you walk along, sections that you have been anticipating become part of your experience instead of just pictures in a book.

It can be tricky to compare a trail to a centre-based holiday. There are benefits and disadvantages to both. Based in one place, practicalities are sometimes easier and you can get to know the area well; on a trail the process of moving on each day can initially be unsettling but should (with any luck) become a large part of the enjoyment in itself. Life becomes simple with just the trail to think about.

Pen-y-ghent in the Yorkshire Dales

Accommodation for walkers in the UK is as varied as in other countries, with the exception of mountain huts. With the shorter walk-ins there has never been a move to build huts in the mountains. The network of youth hostels and bunkhouses in the valleys is however extremely good, and of course bed and breakfast accommodation in local houses, hotels and farms is abundant.

The outdoor culture is very well ingrained in rural life, with several centres being particularly well attuned to the needs of walkers - for example, Keswick, Ambleside, Fort William, Aviemore, Llanberis and Betws-y-coed. Smaller villages and towns in the same areas also invariably have accommodation and facilities.

Walk in Britain with Alpine Exploratory

Alpine Exploratory offers a number of self-guided walking holidays in the British mountains. Our holidays set you up for a successful trip under your own steam. We arrange your accommodation, whether this is entirely in one place or along the length of a long-distance path. We send you our well-received info packs including routecards, the maps, emergency cards with essential info for accidents, and notes on transport. 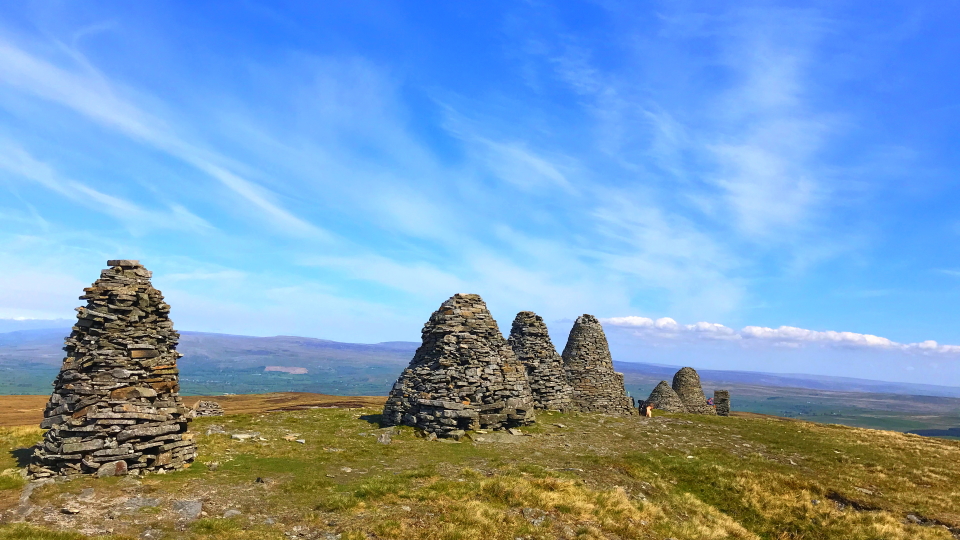 Nine Standards Rigg on the Coast to Coast trail