Travel in Scandinavia: Cities
BEFORE AND AFTER HIKING

Travel in the UK: Cities

Travel - see all our background pages

Scandinavian cities are some of the least-intense urban areas we visit; green spaces and calm streets in Oslo, Stockholm or Trondheim can be a relaxing contrast to your hiking trip. Visiting a city in general can be an invigourating contrast and a way to celebrate a succcesful trip to the mountains.

Clients receive our detailed Travel Notes on booking. As well as directions to and from the following cities relevant to each route, our Notes include brief hotel lists that we maintain as we visit on our recces. Please tell us how many days you have to spare, and we'll advise.

We introduce our Scandinavian cities:
Norway:

The sparsely-populated Norwegian mountains have enchanting cities around the perimeter. Oslo has the biggest airport by far, but with other flights and with trains the other cities are easily reached, and make sense after a trek.

Travel in Norway - our guide to trains within Norway

About Bergen
Norway's second-biggest city is the centre of its archipalaego. It shares characteristics with Aberdeen in a great number of days of rainfall per year, plus being a centre of offshore activity. Bergen is at heart a wooden-fronted sea harbour. A modern, youthful, town extends back from the shore. The station is the terminus of the scenic line from Oslo. 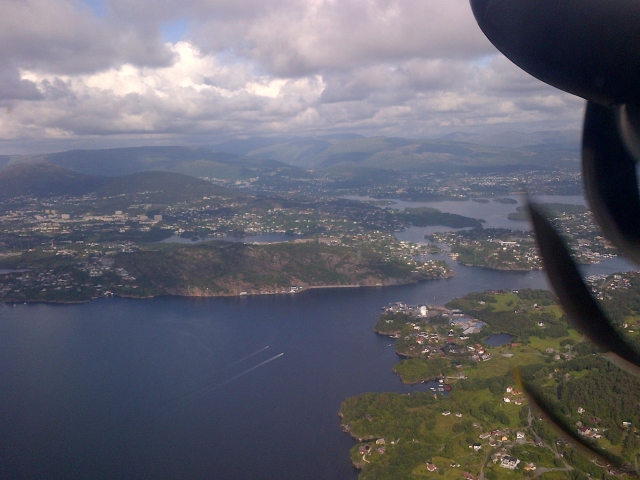 Bergen is included in info packs for the following routes:

Staying in town
Bergen's harbour is lined with restaurants and hotels. Two popular Norwegian chains have multiple hotels and near the train station is a historic touring hotel.

About Bodo
Bodo is the main ferry port for the Lofoten islands; ferries leave for A i Lofoten and Moskenes. It's also the end of the Norwegian rail network, as the terminus of the 9-hour train coming North from Trondheim. We're well inside the Arctic Circle. The town itself is a harbour and a grid pattern of pleasant streets leading uphill. Bodo's airport is a 10-minute walk from the front. 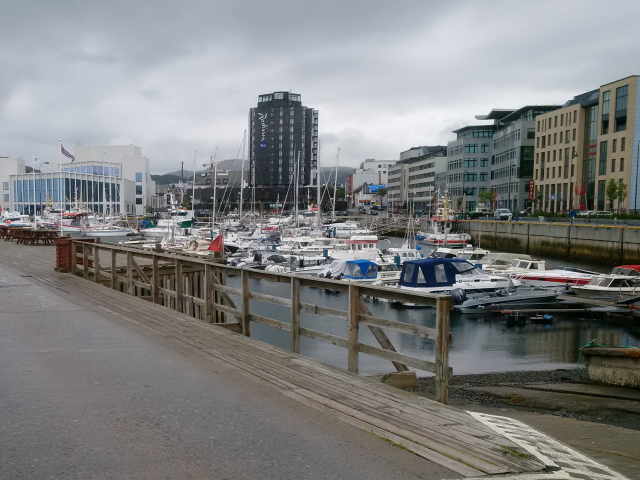 Bodo is included in clients' info packs for the following routes:

Staying in town
Bodo's sea front is a row of large hotels including the Thon and a tall Scandic tower. Your next steps will be the train station, the central buses, the sea ports or the airport.

About Oslo
Oslo is at the top of the Oslofjord, the major fjord in the South of the country. Hills and ski slopes rise behind; in a flatter way, the capital city is the country in miniature. A modern town grid is the bulk of the city but life is moving to the waterfront and not just the famous opera house. We really enjoy Oslo and recommend exploring to the sides of the city (and the ferries on the fjord). 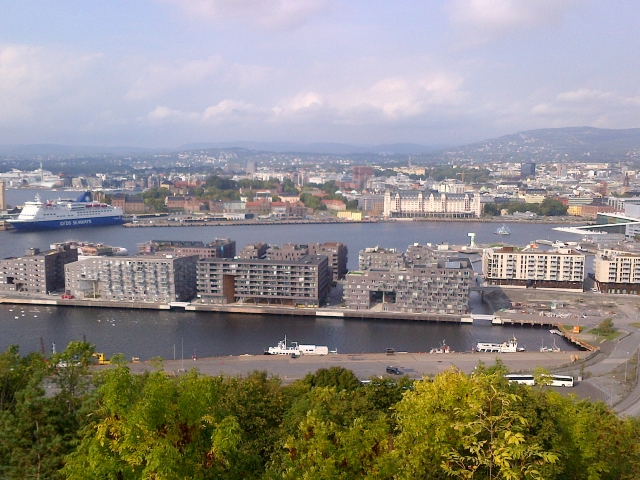 Oslo is included in clients' info packs for the following routes:

Staying in town
Oslo is unusual in having two remarkable hotels on a hillside above town. In the centre are smart Norwegian hotels in historic buildings.

About Stavanger
In the South West of Norway, Stavanger is an extra journey from Bergen or Oslo which are closer to most mountain ranges. (For the Hardanger plateau and the famous Priekestolen rock, Stavanger is more natural a base.) Stavanger is smaller than Bergen or Tromso and has less of a special siting around its water; nevertheless it's delightful in its narrow streets by the harbour. 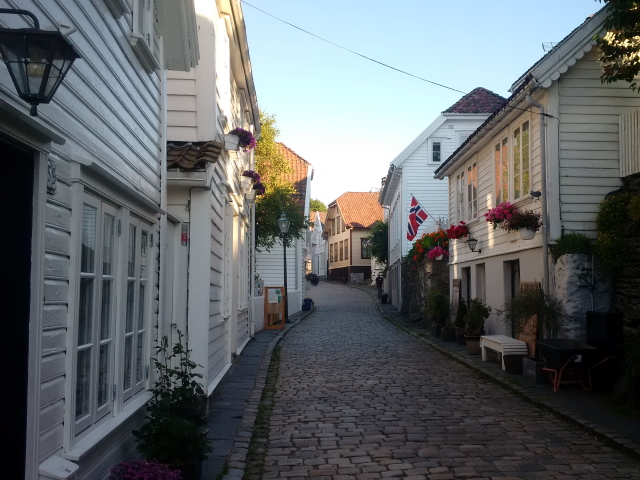 Stavanger is included in clients' info packs for these routes:


About Trondheim
Trondheim sits at the Northern end of the bulbous Southern half of Norway. It is 7 hours by train or 1 hour by air from Oslo. Take the night train North from Trondheim, or internal flights from its airport. A city on the water, Trondheim is at the neck of its fjord. The city centre is ringed by canals. The city has a major university and plenty of historic architecture. 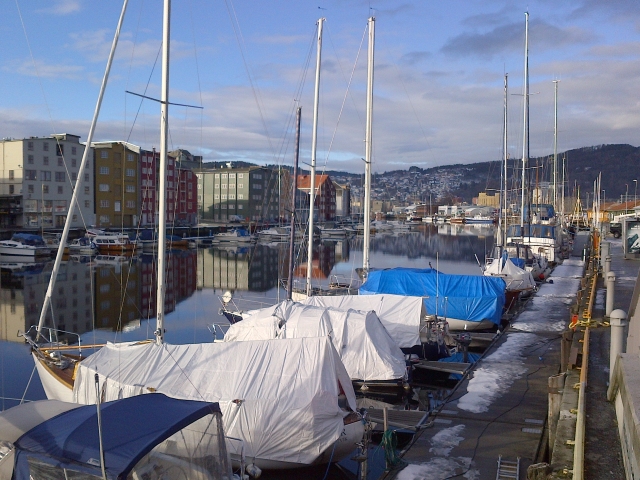 Trondheim is included in info packs for the following routes:

Staying in town
The central streets and the watersides host many hotels, near the train station and the ferry terminal. Norwegian hotels offer excellent breakfasts.

Sweden's big cities Stockholm, Gothenburg and Malmo are in the South while the Kungsleden is in the North. Flights tend to change at Stockholm or Oslo (Norway), and anyone traveling by sleeper train should be able to see Stockholm.

About Stockholm
Built around a huge harbour and spread over half-a-dozen distinct areas, Stockholm is a city to traverse on foot. Start in the Gamla Stan (old town) where narrow cobbled streets cross the hill. The new town to the North is a grid pattern of smart apartment buildings. Volvos with winter tyres drive in and out; skiiers walk into town from the sleeper trains. 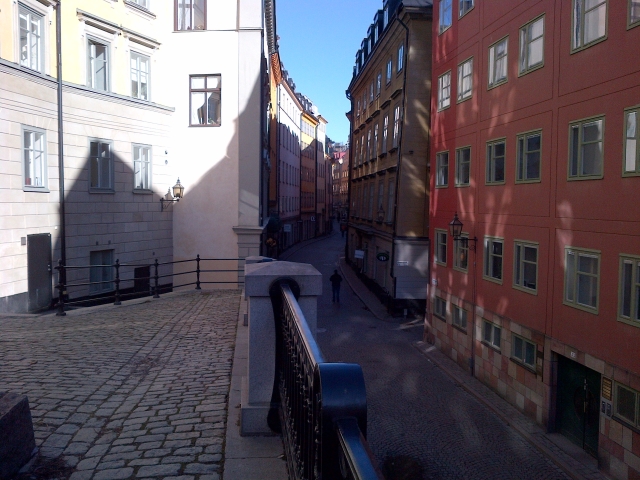 Stockholm is included in info packs for the following routes:

Staying in town
Look for hotels in the quarters lived in by Stockholmers, like Sodermalm to the South, as opposed to around the train station. Plan time for breakfasts; like Norway, breakfast is a feast which can be taken in several courses.

Norway's cities are the ideal base to stock up on outdoor kit, as seen here in Oslo

Travel - our main page for these travel aspects