Book with confidence for 2021

Snowshoeing is simply walking on snow using snowshoes to give extra flotation and grip. Flotation is an appropriate word because without snowshoes you are liable to sink in to deep snow, which would make for tiring and slow progress. Snowshoes also have metal spikes on the bottom to grip on hard snow or on hard underlying layers.

If you enjoy mountain hiking in summer, the chances are you�ll love snowshoeing in winter too. Don�t think for a moment the Alps in winter are all about downhill skiing, crowded pistes, lift queues and noisy mountain restaurants. When the snow�s down, the majority of the mountains are deserted. With fewer visitors than in summer, and decked out in a pristine white coat, the mountains are scenic and tranquil as could be. 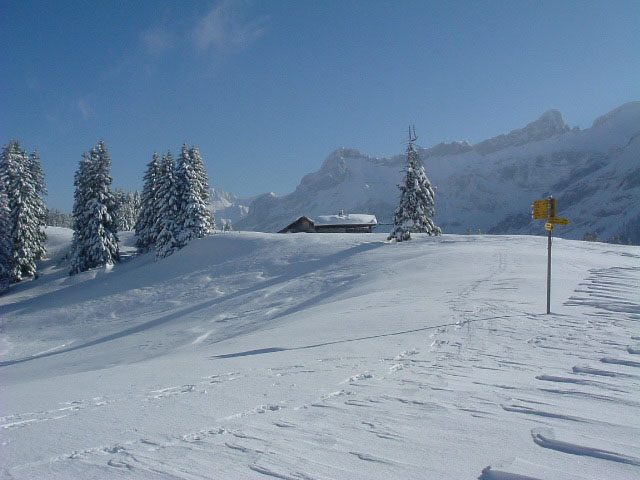 Even experienced hikers often haven�t even heard of snowshoeing. So what�s it all about? Here are our FAQs:

Q. What is snowshoeing?
A. Quite simply, hiking in the snow!

Q. What are snowshoes?
A. Bits of kit worn under your hiking boots and attached with straps.

Q. What are snowshoes for?
A. They stop you sinking in soft snow, and give you grip when it�s icy.

Q. How hard is snowshoeing?
A. The same as mountain hiking. It�s an outdoor activity involving some exertion. The key is to choose the right itinerary and pace.

Q. Will I be able to do it?
A. There is very little technique to learn, but you need to be willing and able to fill your lungs and stretch your legs a bit. If you can hike, you can snowshoe!

Q. Do I need a leader?
A. It depends what you want to do. There are waymarked trails in the valley that can be safe and easy to follow unguided. Guided tours aim to go to wilder places that require local knowledge and good judgement to stay safe.

Q. When can I snowshoe?
A. Generally the Alpine season starts at the end of December, and runs until early April. 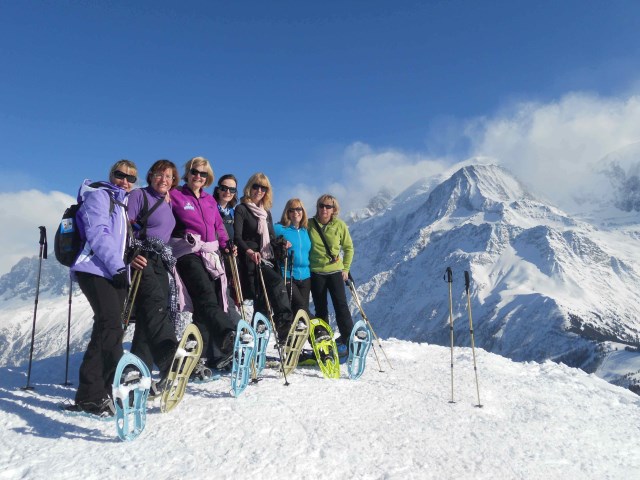 Alpine Exploratory does not offer its own snowshoeing holidays. However, Phil Jarratt, one of our summer alpine trek leaders, has been leading snowshoeing tours in the Alps since 2007. These are based in the Chamonix valley and extend to other parts of the Alps.

Snowshoeing the T�te de Bostan, a summit in the Chablais region, French Alps

Into the snow...
Good snowshoeing terrain can be valley tracks, undulating forests, meadows and open hillsides. You might see a trail of yeti-size footprints, with the tell-tale lines of small holes alongside made by walking poles. At other times, perhaps after fresh snowfall, your snowshoes will be the first things to touch the powder.

Typical routes
A typical day�s snowshoeing might start off in a forest. If you�re in luck the snow will be falling and there will be pure silence as the animals and birds save their energy instead of looking for food that's hidden by the snow. Perhaps your route will take you up onto the hillside on tracks or paths, through summer meadows now under a carpet of clean white snow. A more challenging snowshoe walk might head for a small hill, climbing through trees to emerge onto rounded upper slopes with views of peaks and ridges all around. 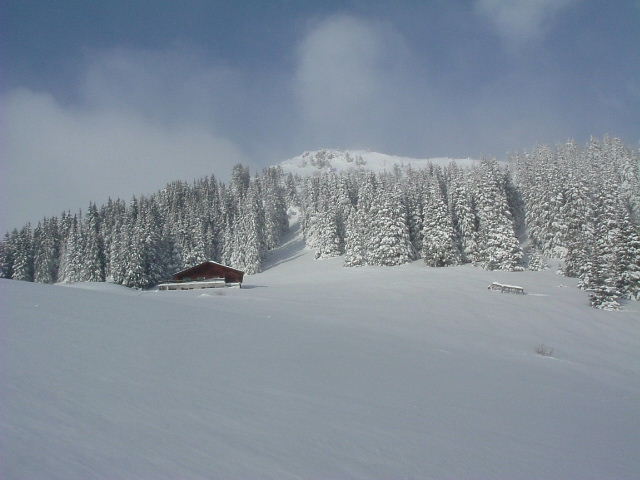 There are some important safety considerations with snowshoeing. All the usual considerations appropriate to mountain walking apply, plus some extra matters that arise from the inherent risks of the winter landscape.

These extra factors include the short daylight hours, sometimes the cold, but most importantly of all the risk of avalanche. Starting out with a qualified leader is recommended in order to learn the techniques and gain an appreciation of avalanche avoidance and rescue. Your leader must hold one of two awards: the International Mountain Leader (UIMLA) or the Guide (UIAGM/IFMGA). 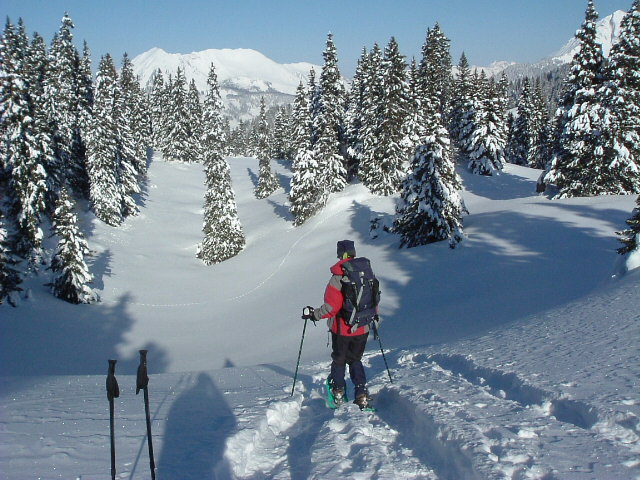 Snowshoeing equipment can be hired at ski shops at the start of your trip. If you hire a qualified leader, or join an organised tour, often the specialised equipment will be provided as part of the service. You'll need the following.

Snowshoes
Snowshoes, called raquettes in French, fit easily onto your ordinary walking boots. There's no need for specific winter boots or for compatibility with crampons. There are many types of snowshoe; the most popular in the Alps is the TSL brand. The MSR snowshoes, more readily available in the UK and US, are highly recommended. 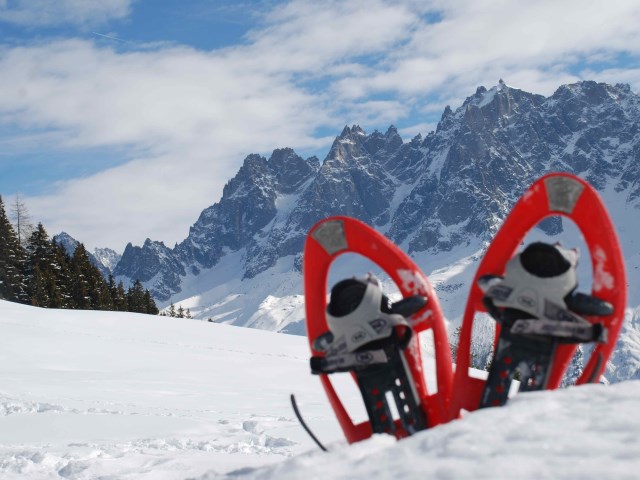 Snowshoes in the Chailloux meadow above Chamonix

The body of most snowshoes is plastic with various types of spike or crampon attached to the bottom to give grip. The foot pivots in the snowshoe so that walking is still a normal action. Many snowshoes have clips at the back of the foot that can be used to raise the heel up, making it less tiring to climb slopes.

Poles
A pair of poles is essential for balance. These can be your normal collapsible walking poles, or your ski poles, or poles given to you when hiring your snowshoes. If using walking poles it's preferable to fit snow baskets in place of the usual smaller baskets, in order to stop the poles sinking as far into the snow.

Avalanche transceiver
A transceiver is a device for locating people buried in avalanches. Transceivers are small boxes of electronics, about twice the size of a mobile phone or a GPS unit, that can both transmit and receive signals (hence the name trans-ceiver). They are also known as ARVAs in the French-speaking Alps or internationally as beacons.

At any one time the transceiver, when turned on, is either transmitting or receiving. Normally worn near the body, in transmitting mode, if one of your party is avalanched the transceiver can be pulled out and turned to receiving mode in order to pick up their signal. The idea is then to find the buried transceiver and get the person who is hopefully still attached to it out of the snow as quickly as possible. A transceiver in receive mode gives out beeps that increase in frequency and volume the nearer it is to the buried (transmitting) receiver. The various models of transceiver vary greatly in operation and there are also further complexities. 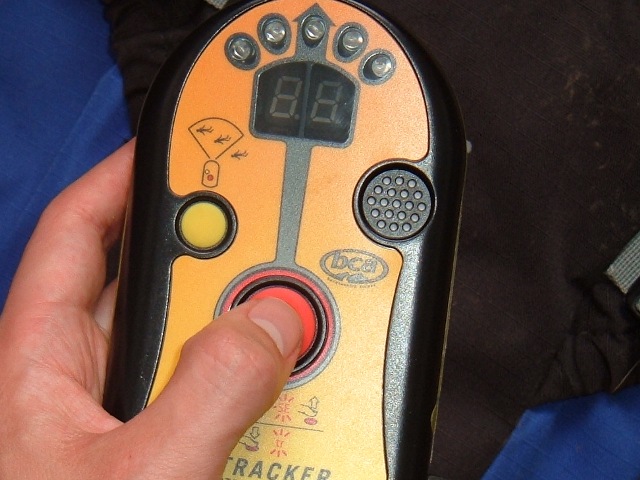 The Tracker, a popular transceiver

In all winter landscapes with sloping terrain, avalanches can be a risk; your qualified guide will choose areas to walk in that minimise that risk. Depending on the type of walks you will be doing, you should expect to be shown how to operate your transceiver and how to approach a search.

Winter clothes
Bring good waterproofs, warm layers such as fleeces, hat and gloves, ski goggles and sunglasses. Temperatures in the Alpine winter can vary enormously from mild to very cold.

Your leader will carry a snow shovel and probe; you might also like to bring these yourself.

A new activity
Walkers are discovering snowshoeing as a means of enjoying the best Alpine scenery in winter - scenery quite unlike anything shown to either the downhill skier in the Alps or the winter walker in the UK.

Alpine resorts
Around the Alpine resorts it is common to see groups of winter walkers out on snowshoes, most likely enjoying the sunshine and the exciting exploration. Alpine resorts now fully recognise the importance of snowshoeing and are bringing the activity into the mainstream alongside the established skiing industry. French and Swiss resorts are particularly clued up. However, there is never a problem in finding solitude away from the beaten track!

Snowshoeing and skiing
The beauty of the Alps is that the mountain villages and their hotels, restaurants and ski infrastructure can be used to full advantage by snowshoers. Snowshoeing and skiing are not substitutes for each other but rather they complement each other in the same beautiful white mountains. Snowshoeing carries an air of exploration, opening up intimate and stunning views to the walker that previously only the off-piste skier could reach.

Downhill skiing remains by far the most popular activity in the winter Alps. On your snowshoeing break you are free to take time out to tackle the local pistes. We can help with ski or snowboard hire, lift passes and lessons for one or more days. You might prefer to stay out in the Alps for longer than usual. For example, have a week of skiing before or after your snowshoe holiday in the same village or elsewhere in the Alps.

Depending on the location we can suggest many other winter activities. Types of skiing other than downhill include cross-country skiing (ski de fond in French-speaking areas, langlaufen in the German areas, langrenn in Norway) which often takes place on specially prepared tracks through forests around the village. Many Alpine villages have ice skating rinks. The local tourist office usually has a programme of events, from dog-sledding to luges. 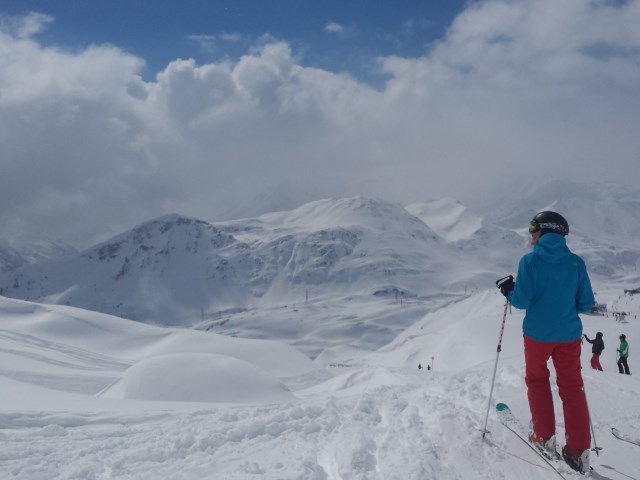 A skier looks out, St Anton in Austria

Please don't hesitate to contact us at info@alpineexploratory.com with any questions.

Guided and Self-Guided Holidays - see them all